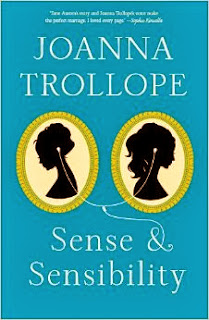 Source? the publisher via TLC Book Tours
**FTC Disclosure: I received a copy of Sense & Sensibility from the publisher in exchange for an honest review.  The review below and the opinions therein are my own and offered without bias.

Why? I've never read the orginal.  There, I've said it.  I was an English major too.  I feel like I'm admitting some sacrilige, but my literature emphasis area and love has always been American lit.  Forever I have meant to go back and read the Bronte and the Austen novels, but sadly, I just haven't.  When these newer versions starting popping up everywhere, I made a pact with myself that I would not read them until I read the originals.  I've kept that pact until now.  I had every intention too, of reading the original before Trollope's version as soon as I agreed to read and review it.  But, alas, I did not.  It will be interesting to see how my response to Trollope's version compares with those who HAVE read the original.

What Now?
Yeah, I'm gonna read the original.  I need to.  I have to.  What better time for the classics than the holidays? :)

Elinor sometimes wondered how much time and energy the whole Dashwood family had wasted in crying. (6)

Elinor clamped an arm round her shoulders and held her hard.  It must be so awful, she often thought, she often thought, to take everything to heart so, as Marianne did; to react to every single thing that happened as if you were obliged to respond on behalf of the whole feeling world.  Holding her sister tight, to steady her, she took a breath.  (7)

Fanny had wanted a man and a big house with land and lots of money to run it and a child, preferably a boy.  And she had got them.  All of them.  And nothing, absolutely nothing, was going to stand in the way of her keeping them and consolidating them.  Nothing. (13)

However detestable Fanny had made herself since she arrived at Norland, all the Dashwoods were agreed that she had one redeeming attribute, which was the possession of her brother Edward. (23)

"Do you, Elinor Dashwood, picky spinster of this parish for whom no man so far seems to be remotely good enough, fancy this very appealing basket case called Edward Ferrars?" (26)

"Wouldn't it just completely piss off Fanny if you and Ed got together?" (27)

Marianne turned on her side to face Elinor.  She said, much more urgently, "Ellie, I've got to.  I am going mad here; it's like a kind of prison, a prison of boredom and nothingness.  I've got to know what's happening to him."
Elinor said, "Have you looked on Facebook?"
"He hasn't been on it.  He hasn't been on it since he left here.  He hasn't even changed his status from 'single'. (186)

"You poor dear, " Abigail had said to Elinor. "It always comes back to you, doesn't it?  The price o having your head screwed on the right way." (204)

"You're telling me that Wills has dumped Marianne for the daughter of a rich Greek he hardly knows?" (205)

"You wouldn't believe it," Charlotte Palmer said, "but it's all over YouTube already!  Someone must ahve been filming, on their phone, at the wedding.  Aren't people just the end?" (209)

Those Dashwood girls, Char, such sweeties, but really hopeless. So emotional. I suppose you only have to look at their mother, don't you?" (233)

John Dashwood promised his dying father that he would take care of his half-sisters. But his wife, Fanny, has no desire to share their newly inherited estate with Belle Dashwood’s daughters. When she descends upon Norland Park with her Romanian nanny and her mood boards, the three Dashwood girls—Elinor, Marianne, and Margaret—are suddenly faced with the cruelties of life without their father, their home, or their money.
As they come to terms with life without the status of their country house, the protection of the family name, or the comfort of an inheritance, Elinor and Marianne are confronted by the cold hard reality of a world where people’s attitudes can change as drastically as their circumstances.
With her sparkling wit, Joanna Trollope casts a clever, satirical eye on the tales of Elinor and Marianne Dashwood. Reimagining Sense and Sensibility in a fresh, modern new light, she spins the novel’s romance, bonnets, and betrothals into a wonderfully witty coming-of-age story about the stuff that really makes the world go around. For when it comes to money, some things never change. . . .

The ridiculousness of it all...for all its silliness, I think that's exactly what Trollope had in mind.  I do wish that I had read the original first though because I think I would have been in on more of the tongue in cheekiness.

I'm a little bit of a cynic where all this smoochy, smoochy, googly eyes are concerned, and before I reached 100 pages, I was rolling my eyes.  Oy.

Belle - gracious alive, what a meddling mother!
Fanny - what an evil witch...and that husband of hers..yuck!

True love, treehouses, husband hunting, private schools, cottages, lordships and ladyships and all the relatives in between are quaint and lovely in period pieces, but those same things didn't work for me in this twenty-first century re-telling.

Most of the men in this story...why in the world these girls were pining over them I haven't a clue.

I will be interested to find out how other bloggers who read the Austen classic will respond to Trollope's take on the Dashwoods, their extended families, and their all out obsession with who would marry who. 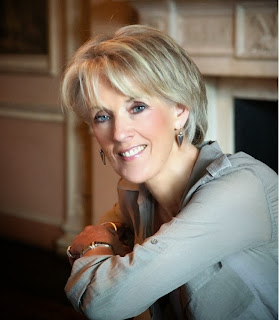 Joanna Trollope is the #1 bestselling author of eighteen novels, including The Soldier’s Wife, Daughters-in-Law, Friday Nights, The Other Family, Marrying the Mistress, and The Rector’s Wife. Her works have been translated into more than twenty-five languages and several have been adapted for television. She was appointed to the Order of the British Empire in 1996 for her services to literature, and served as the Chair of Judges for the Orange Prize for Fiction 2012. She lives in London and Gloucestershire.