A Uterus is a Feature, Not a Bug by Sarah Lacy - TLC Book Tours

A Uterus is a Feature, Not a Bug: The Working Woman's Guide to Overthrowing the Patriarchy
by Sarah Lacy 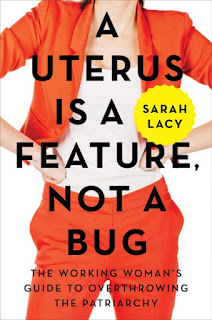 About the Book from Harper Collins

A rallying cry for working mothers everywhere that demolishes the “distracted, emotional, weak” stereotype and definitively shows that these professionals are more focused, decisive, and stronger than any other force.

Working mothers aren’t a liability. They are assets you—and every manager and executive—want in your company, in your investment portfolio, and in your corner.

There is copious academic research showing the benefits of working mothers on families and the benefits to companies who give women longer and more flexible parental leave. There are even findings that demonstrate women with multiple children actually perform better at work than those with none or one.

Yet despite this concrete proof that working mothers are a lucrative asset, they still face the “Maternal Wall”—widespread unconscious bias about their abilities, contributions, and commitment. Nearly eighty percent of women are less likely to be hired if they have children—and are half as likely to be promoted. Mothers earn an average $11,000 less in salary and are held to higher punctuality and performance standards. Forty percent of Silicon Valley women said they felt the need to speak less about their family to be taken more seriously. Many have been told that having a second child would cost them a promotion.

Fortunately, this prejudice is slowly giving way to new attitudes, thanks to more women starting their own businesses, and companies like Netflix, Facebook, Apple, and Google implementing more parent-friendly policies. But the most important barrier to change isn’t about men. Women must rethink the way they see themselves after giving birth. As entrepreneur Sarah Lacy makes clear in this cogent, persuasive analysis and clarion cry, the strongest, most lucrative, and most ambitious time of a woman’s career may easily be after she sees a plus sign on a pregnancy test.

Golden Lines and My Thoughts

We all know we live in a patriarchy, but somehow saying the word "patriarchy" makes you sound like some kind of unhinged extremist.
(17)
Why does everything have to be a fight?  Why can't we all recognize the patriarchy as a description, accept it, and then get to the real work of balancing things out.  Lacy does a fantastic job of pointing out that being a feminist does not mean that you hate men.  A feminist simply wants equality for everyone.  Period.

Misogyny is not imposed against all women equally.  It is only used against those who are in some way a threat to patriarchy.  "Benevolent" sexism/misogyny rewards women who hold up the patriarchy's view of women.  "Hostile" sexism/misogyny punishes those who do not.
(41)
This discussion blew my mind...but very clearly explains why even some women are ok with the patriarchy in control...they've been taught to be good...if you're good, you'll get rewarded by those in power.

This book is called "A Uterus Is a Feature, Not a Bug," not "A Baby Is a Feature, Not a Bug." Whether or not you're a mother or even want to be a mother, you're a sister as far as I'm concerned. (61)
There were a few places in Lacy's book I felt would leave out women who have not given birth...especially those who have been unable to give birth.  I am not one of those women but have many friends who are.  As in this quote, Lacy tries very hard to include all women, but I'm not sure if she would be successful.

I came out of labor and called Paul for an update on the insanity.
(67)
One characteristic of women that Lacy displays vividly is our ability to get done what has to be done, our tenacity, our loyalty, etc...all those characteristics that make us anything but the weaker sex.

The skill sets required by motherhood and entrepreneurship are astoundingly similar.
(77)
I loved reading this section...Lacy spends a great deal of time pointing out all the "flaws" the stereotypes would have us believe that are, in fact, positive aspects of being a woman, a working woman, a woman who runs a company, a home.

The "warrior girl ethos" puts girls at risk because they come back before they are fully healed.
(90)
The "warrior girl ethos" is the downside of all those traits pointed out above...when we're holding on and keep going past our healthy points, we are then bending once again to the patriarchy...trying to work even harder to prove our worth...many times, ironically, to our detriment.

My nanny took particular exception to the magazine pointing to Eli and labeling him "problem #1" in the photo
(108)
The Uber story blew me away, especially in light of all that we currently know about Uber's CEO and workplace environment. Lacy's experience as a somewhat privileged working mother taking on the patriarchy was scary...imagine what it feels like to someone without that privilege.  Lacy pushes us constantly to act on what we say we believe.  I can't know how it feels to be anyone other than myself and my place in this world, but I can honor other women's perspectives, hear them out, and help where they tell me they need it most.

The upshot: White men in tech don't actually give a shit about diversity
(115)
Lacy's world is the tech world so there is a lot about that specific workplace environment...but I've seen this same attitude in educational administration as well. In a profession of mostly women, take a look at the upper echelon...I don't have the statistics for this, but you better believe I'm going to be looking them up.  That's what reading Lacy's book will do...make you dig for more info and add a whole host of women entrepreneurs to your Twitter feed!

Women need new patterns every bit as much as the men controlling boards and capital do.
(132)
Lacy presents a plethora of statistical information showing the numbers...the unbalanced percentages of women in high places and dispelling the age old adage of there not being enough women trained for those positions.

My life was a drug-free, totally legal version of a Scorsese movie.
(140)
I was so glad that Lacy not only tells the story of herself as the highly successful woman company owner in a world of men, but she also lets the reader see that living that life is not in the least bit easy and that family life and personal life may sometimes take a huge hit before a working mom fully comes to realize her own true self.  Not that Lacy encourages the breakdown of family or personal life...she presents a very realistic case for the patriarchy being so ingrained in us that we have to sometimes go through all of these stages just to fully breakthrough and realize who we are.

One of my investors sent his security team to my house as the story exploded in the first twenty-four hours and my face was everywhere as the enemy of Uber.
(155)
When many would have tucked their tails and hid, Lacy did just the opposite.  She responded to the threats from Uber execs and supporters "full on cottontail" to protect her livelihood and that of her children.

It was only in 1972 that the Supreme Court rules that both parties within a marriage were separate entities with their own individual rights.
(188)
Mind blown.
When I was born, my mother was not recognized as a separate entity with her own individual rights.  I was 4 years old whenshe was given that right.
Mind.
Blown.
Still having to digest this and wondering what else I don't know.

The patriarchy wins when women are divided.  We need to fight for single mothers living in poverty if we believe anything we say about equality.
(214)
Lacy has that conversation that is so needed today about women supporting each other.  I do want to read more about the research she presented that questions the ideas that women are attacking each other.  I'm still wrapping my head around all of this because I spend a lot of time trying to help my daughters navigate the world of "mean girls"...I've seen it.  I do get the idea of those same traits as beneficial for a man but "bitchy" in a woman.  Just wondering how these same ideas apply to younger women?

Women have to be willing to be the boss, and they have to do it as women, not by pretending to be men.
(226)
I thoroughly enjoyed Lacy's discussion of Iceland and the status of women in that country.  Again, she paints a realistic view and weaves history and facts in with the political and social.

By 2020, China will have a thirty to forty million surplus of men, the largest gender imbalance in the world.  Twenty-five percent of Chinese men will be "low skilled bachelor[s]."
(242)
More reading for me.  Again, my entire life I'd heard the one child per family rule in China...but I've not read the "unintended social results" that are beginning to become visible.  Interesting indeed that this heavy population of men is anything but happy, content, or satisfied.  Perhaps men and women could, in fact, complement each other if allowed to do so.
Perhaps.

I'm sad. I'm starting to think I can't actually have it all. That it's all slipping away. That on the wrong day, child protective services would be horrified if they walked into this house.
(254)
Most women will enjoy Lacy's honesty.  Living her life isn't at all easy...no matter how much money, nannies, house in San Francisco, travel, etc.  at the end of the day, she is Sarah Lacy, Mom.  And with that title comes many of the same fears the rest of us have about ourselves.

I became like Evie by putting on a suit of feminist armor every day whether I called myself a feminist or not, whether I felt that strong or not.
(277)
Patterns.  What do we do now with all of this info Lacy has given us.  We get up every day and do it again.  We set new standards.  We teach young women and young men differently.  We try to leave behind a world a bit better than when we entered it so the next generation of women can carry the torch. 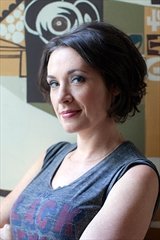 Sarah Lacy is the founder, CEO, and editor-in-chief of the investigative tech news site Pando.com. She has been covering technology news and entrepreneurship for over fifteen years, with stints at BusinessWeek and TechCrunch before founding her own company while on maternity leave in 2011. She lives in San Francisco. Most importantly of all, she is the mother of two young children.