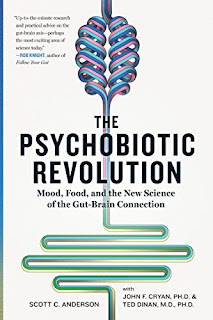 The Psychobiotic Revolution: Mood, Food, and the New Science of the Gut-Brain Connection

Source? provided by the publisher via TLC Book Tours in exchange for an honest review.

Why?  the link between gut health and mental health isn't an idea that's new to me.  I've read a lot about, see the connections clearly, and want to learn as much as I can.  I was trained to be a researcher so I'm constantly looking for answers, explanations, or even just more questions.

Title?  not really much here that would have pulled me in...the sub title is helpful for sure.
Cover?  Meh...I kindof expected more from National Geographic.

I've already looked in the grocery store for yogurt without added sugar...guess what?  I haven't found much of it.
I think it's time we pay a lot more attention to what we are buying and blindly consuming.  I know I am.

Properly established, a compatible biofilm can lead to a lifetime of gastronomic bliss, unburdened by inflammation and its frequent companions, depression and anxiety (22).

We have long comforted ourselves that breast milk is pure and antiseptic, but we now know it is a microbial balm for your vulnerable baby gut, full of bacteria (71).

In short, your body hobbles your immune system while it deals with stress (124).

The WHO (World Health Organization) estimates that depression and anxiety will be the top cause of disability for the coming decades.  That the rates are increasing even in the face of escalating usage of psych meds, indicates that we don't yet have a good solution in hand. 140-141

Many studies, both quantitative and anecdotal, confirm the age-old adage attributed to Hippocrates: "Let food be thy medicine and medicine be thy food" (179).

The only exercise some people get is operating the remote control (222).

Modern processed foods were developed, for the most part, in the United States.  We have a tradition going back only hundreds of years and resulting in a mixed, poorly vetted, inconsistent cuisine (243).

We've long been told that what we eat is the foundation for everything.  We don't want to hear it; we want a pill or some other easier answer to getting our lives back on track, feeling better, and taking control of our brains.  The authors of The Psychobiotic Revolution present clear research that we are indeed what we eat and that our lives would be much more enjoyable if we could balance our gut health in order to balance the rest of us.

The charts and drawings similar to what we used to trace in middle school...I'm a visual person so charts, photos, graphs, drawings are a must for me...I do wish there had been more color.

the history of penicillin and other antibiotics - "mold juice" (32).

the boy in the bubble

medical history intertwined with the science...another successful way to keep the reader going!

the similarity between broad spectrum antibiotics and chemo.
"...taking antibiotics is like dropping a bomb into your guts" (205)

the very specific discussion of "bad" bacteria and "good bacteria" and our propensity today to think of all bacteria as something to be rid of.

the birth to death discussion of our microbiota

the humor...amidst the deep scientific discussion, a "boop" of humor would bop me on the head and make me chuckle...just enough to keep going.  I had to give myself permission on several occasions to not be worried about the fact that I really wasn't sure exactly what the authors were talking about.

"Our evolutionary history, which included very few pastries rolling across the savanna, didn't prime us for glazed doughnuts" (87).

the discussion of the Mediterranean type diet, fiber, and a Japanese diet...although I do with there was more of this kind of application information.

the discussion of the American diet of being exactly opposite of what our microbiota need...the authors don't just tell you this; they show you.  It makes perfect sense.  There were several places where I thought, "no wonder I feel bad when I eat that."

the discussion of the nervous system and its divisions...reminded me of high school biology...I remembered a lot of the info in these chapters from the "good ole days."  I guess I was paying attention after all.

the case studies used throughout the chapters to illustrate the theories

the very specific discussion of the types of psychobiotics and where they can be found...the mixtures of certain ones, and why or when you would want to be sure and eat them

Chapter 7 - My Favorite Chapter - very specific information on how to add more psychobiotics to your diet.

the brief information on intermittent fasting - I'll definitely be reading more about this.

Whether we want to heart it or not, many of the major ailments of the present are directly related or exacerbated by the food we eat or don't eat...including IBS, Crohn's Disease, Ulcerative Colitis, Celiac and Gluten Sensitivity, eating disorders, obesity, Diabetes, Parkinson's Disease, Lewy Body Dementia, Heart disease, Autism Spectrum Disorder, Chronic Fatigue Syndrome.

I'm a geek so I would be remiss if I didn't mention the Appendix, the Glossary, the Notes, the Further Reading page, and the Index.
I'm not even sorry for liking these things ;)

The science is thick...not that I didn't like it...but I do think the average person won't want to wade through all of it.

This book is for you if you wonder if you'll ever feel ok, and you are ready for a serious discussion about the food we eat and why and how it affects our mental health via gut health.

SCOTT C. ANDERSON is a veteran science journalist with specialization in medical topics and computer programming. He was one of the creators of Lego Island, a computer game, and his work has combined computer programming with medical research. He runs a laboratory called Freedom Health that studies bacterial health in racehorses and has developed prebiotics for animals and humans. He lives in Hudson, Ohio (between Cleveland and Akron), was born in Frankfurt, Germany, and recently lived in Sonoma, California.

JOHN F. CRYAN is professor and chair of the department of Anatomy & Neuroscience, University College Cork. A principal investigator in the Alimentary Pharmabiotic Centre, a leading-edge institute researching the role of microbiome in health and disease, he lives in Cork, Ireland.

TED DINAN is professor of psychiatry and a principal investigator in the Alimentary Pharmabiotic Centre at University College Cork. He was previously chair of clinical neurosciences and professor of psychological medicine at St. Bartholomew’s Hospital, London. He lives in Cork, Ireland.