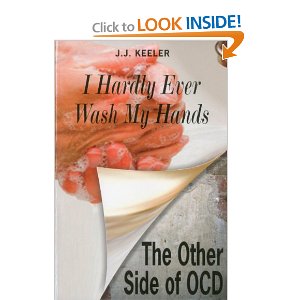 I Hardly Ever Wash My Hands: The Other Side of OCD by J.J. Keeler
Paragon House, 2012

Source? I received my complimentary copy from the author and publisher via TLC Book Tours in exchange for an honest review.  All opinions are my own.

Why?  It's probably only fair that I disclose upfront how close I am to this topic.  One of my daughters was diagnosed with OCD a few years ago.  Up until then, like most people, I also thought OCD was about hand-washing or manic cleaning.  The truth of the matter is that OCD can manifest itself in many ways.  It is an illogical obsession...for rules, organization, cleanliness, perfectionism (my daughter's flavor), things to be done a certain way, etc.  Once my daughter was diagnosed, I looked around and began to recognize some of the same tendencies in myself and other members of my family...fears or ways of doing things based on illogical, unrealistic fear...and true panic when that order breaks down.  Lots of folks kid around and say, "Oh my gosh, I thought I was gonna have a panic attack!"  Until you've really had one though, there's no way for you to understand.  I read just about anything and everything I can get my hands on about OCD in order to keep us all somewhat stable...whatever that means ;P

What Now?  I'm happy to pass this one along to someone who'd like to read it.  I gently read it on purpose, no bindings are broken, and I even annotated on post-it notes instead of inside the book itself!! Yay Me!!  The author also autographed the inside cover of the book :)
Just let me know in the comments if you're interested.  I'll keep this giveaway open for a week and draw a winner next Friday, July 27 :)

Nowadays, the obsession ebbs and flows.  The vast majority of the time, I don't worry about it at all.  My mind has moved on to other things.  But it is always there, sitting behind the scenes of my brain, waiting to be called to center stage.

If you can say anything nice about OCD, you would have to compliment its creativity.  Just when you're working on conquering one demon, another pops up, like the purple gophers in the old Whac-a-mole game. The better you get with your large, rubber mallet, the quicker the gophers start coming right back.

The weird thing about OCD, or more accurately one of the weird things, is its ability to seesaw: on occasion, it allows reason to seep in, like a ray of sun through a broken window shade.

I do, however, believe in God, and have come to accept that it is called faith for a reason: if there was proof - irrefutable video footage of Heaven - the word wouldn't fit.

I sometimes wonder if mental illnesses are like snowflakes with no two being alike. It's important to keep that in mind and remember your OCD might be different from mine.

Summary
Keeler discusses very personal stories about growing up with OCD and not realizing what was driving her crazy until well into adulthood.  She adds humor mixed with facts in order to press forward her most important points, OCD is not always the stereotypical hand-washing disease and those suffering from OCD in its many variations can and do live normal lives.

What I Liked
The #1 most important thing in this book, to me, are the examples and concrete statements explaining that OCD isn't always what we think.

If I suffered from Keeler's particular kind of OCD I would be scared to death...and she does a great job of portraying her fear...of hurting someone, of telling others about her fears, about thinking something is really really wrong with her, etc.  I think, if nothing else, someone with the irrational fear of hurting others would be thankful to finally read something that shows them they are not the only one...and, most importantly, that a fear of hurting someone is a lot different than actually hurting someone.

The bomb in the Teddy Bear - this chapter was one of my favorites bc it reminded me of an incident with my older daughter that happened when she was a child.  She collected Ty Beanie Babies, had tons of them, and everybody, knowing of her love for them, gave them to her as gifts.  There was this one Beanie Baby, however, which I kept finding all over the house.  I would put it back in the toybox, on her shelf, on her bed, etc. only to find it again the next day hidden somewhere in another part of the house.  A few times I simply found it in the hall where it had been tossed.  At that age, probably 6-7, she couldn't explain to me why, but she simply could not/would not have it in her room.  Even if she could see it somewhere else, as long as it was not in her room, she was ok...but it could not cross her threshold.  I promptly threw that sucker away (it's probably worth a bazillion dollars today).

The chapter on Rules - this chapter fits my OCD flavor the best...I didn't get in much trouble when I was young either...bc I didn't want anyone to be disappointed in me, I believed what they told us in school about drugs and I took following directions very seriously (still do, much to the chagrin of my students at times).  I don't have to have EVERYTHING exactly the way I want it, but the things I can't let go of, I simply can't let go of.  My way has order, it makes sense and gives me some semblance of control in a chaotic world.  I do not, however, try to control things I cannot control...I'm not afraid to fly, for example.
I must pick up pennies, no matter how nasty or where they are found.  Poultry also must be washed, hands and sink scoured and the poultry washed again...salmonella, you know, is a living breathing bacteria just waiting to attack your family :P  Expired items MUST be disposed of.  The day before those items can be lifesavers...after that, you're on your own.
I like law; I like security; I like making rules and expecting others to follow them.  I don't like it so much when some particular "others" don't follow my rules (my two teenage daughters).  I've made it home with something from the store that I didn't pay for, and gone all the way back to pay for it.  Everything must be good.  Period. Check.

What I Didn't Like
The Title - I almost didn't read this bc from the title I thought it was going to be about someone who was "opposite" from hand-washing, i.e. someone who never washes their hands.  That, my own OCD wouldn't have allowed me to read unscathed, and I try very hard to stay away from things I know will set off my reptilian brain (that's what our therapist calls it anyway :)
The author never mentions an aversion to hand-washing...she mentions being untidy but nothing that would make my germ-warfare captain jump up and start calling out orders.

The author's fear of hurting others truly outweighs any of her other compulsions and made me wonder time and time again if this book should have been marketed specifically to people with that particular brand of OCD.  I cannot even imagine living with that kind of fear and would assume that those who do would benefit tremendously from this book.

The author didn't talk much about therapy...just a mention in the last chapter, "Dear Friend."  Again, I am biased here, but an exceptional therapist has been the key to our family's management of OCD.  I also am not a believer in medication without therapy.  We do medicate, but we also "therapize" (my made up word) to the point sometimes that I think I'm therapized to death.  I need my own therapy just to deal with everybody else's therapy...and so on.

Overall Recommendations
For someone who's suffering from Keeler's OCD of hurting others, I think this is a must read for support purposes.  For others with OCD it's an interesting read and you'll see yourself in some of Keeler's examples with her other OCD characteristics since OCD tends to shift...it's a "compulsion" disorder...what a person has a compulsion about is up to his/her own individual brain.

Other Stops on the TLC Tour