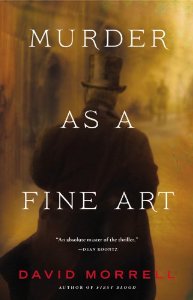 Murder as a Fine Art by David Morrell
Morrell Enterprises 2013

Source? the publisher via Historical Fiction Virtual Book Tours
FTC Disclaimer: I received a copy of Murder as a Fine Art in exchange for a review.  However, the review below and the opinions therein are my own and offered without bias.

Cover? the cover is probably what sold me on this book...really.

Title? Perfect...seamless tie-in with the murderer, his motives and one of the main characters

Reminded me of? Charles Dickens, Jack the Ripper stories,
The Gods of Gotham

Why? Normally I don't seek out self-published books, and normally I wouldn't have wanted to read a book by the author of "First Blood."  The synopsis itself was what drew me in, along with the cover.  A Victorian murder mystery is so right up my alley, it's a no-brainer.

What Now? There are quite a few titles of Morrell's that I'd like to try including The Brotherhood of the Rose, The Spy Who Came for Christmas, and The Successful Novelist
not to mention the many, many suggestions by Morrell in the Afterword, including
Confessions of an English Opium-Eater,
We Two: Victoria and Albert by Gillian Gill
What Jane Austen Ate and Charles Dickens Knew by Daniel Pool
The Ghost Map: The Story of London's Most Terrifying Epidemic by Steven Johnson
The Maul and the Pear Tree by P.D. James and T.A. Critchley

By 1854, London had a population of almost three million, making it the largest city on the planet.  Meanwhile, the police force had merely doubled, to seven thousand, with hardly enough personnel to control the city's seven hundred square miles (16).

He claims that this the only way he can avoid indulging in laudanum - by distracting himself with the effort of walking as much as fifteen miles each day (35).

Her worst fear was coming true.  It was happening again. Back then, there had been four murders in a linen shop, whereas this time there had been five.  That there would be another set of murders, Margaret had no doubt, just as she was certain that the next set of murders would take place in a tavern, the same as the last time.  She was certain of something else.  They would come sooner.
And be worse (148).

Beyond Coldbath Fields Prison, the smoke from London's half-million chimneys mingled with the yellow fog spreading from the Thames, obscuring the city.  Ash drifted down.  But even without the concealing presence of the fog, the artist of death would not have attracted suspicion (161).

Brookline gave me the harshest glare I ever received.  "I don't understand why this woman is allowed to be here.  She doesn't serve our purpose, except to show by her scandalous clothing the contempt that she and her father have for the standards of society.  Not only is the bloomer dress immodest by revealing the outline of her legs, but it is also synonymous with a notorious female activist who campaigns for the disruption of society by advocating the right of women to vote" (235).

In his mind, he connects me with his father and himself. To him, we're all killers, DeQuincey realized.
He vomited (296).

"There is no such thing as forgetting," Father emphasized (326).

A murderer, "the artist," slaughters 5 innocent people, including two children in the middle of the night.  As Detective Inspector Ryan and Constable Becker investigate, they discover another set of killings 43 years earlier, better known as The Ratcliffe Highway murders, which are astonishingly similar to the murders they need to solve to keep Londoners from panicking.  Even more suspicious, the famous author, laudanam addict, Thomas De Quincey outlined those murders in detail only a killer would know in his book of essays called On Murder Considered as One of the Fine Arts.  With his daughter Emily at his side, De Quincey must convince Ryan and Becker of his innocence as well as try to prevent the next set of murders and find the killer before he finds De Quincey.

A window into the world of opium...laudanum, Mother Bailey's Quieting Syrup, Batley's Sedative Solution, and many other elixir names that could be bought without prescription, right over the counter and were offered as solutions to any host of problems any one in the family might have...from a toothache to a colicky baby.  It's a wonder anyone in Victorian Society could think straight.

The details of Victorian England so smoothly folded right into the story...Queen Victoria's unpopular decision to allow her physician (not surgeon, for heaven's sake) administer her chloroform during childbirth, the street jobs of almost 1/2 the population of London, the roles of newspaper illustrators, constables, their titles, their pay, their standing in society, the ideas of the general public, etc.

Emily - she was a woman ahead of her time...from the clothes she wore, her ideas, her boldness, her intellect, her willingness to act on those ideas, and her refusals to be left out simply bc she was of the "weaker sex."

Emily and Becker - I'm keeping my fingers crossed that Murder as a Fine Art won't be the last time we read about these two :)

The politics - Lest we all get lost in the idea of the monarchy...kings and queens, tiaras, beautiful gowns, and other Cinderellaish visuals, Morrell also opens the door into some of the behind the scenes agendas of well-known historical figures...Queen Victoria's ideas of birthing enough children to marry them off to all the heads of Europe, the divisions of the rich and the poor, the intent of Parliament to "destabilize Europe," the rebellions that were the consequences of that destabilization, the separation between the English and Irish, the British East India Company's true mode of wealth.

The vivid descriptions of the streets of London...gaslights, fog, docks, the beggars' underground "society," horse-drawn cabs, livestock, patrolmen with their clackers, prostitutes, and sailors.

Margaret Jewell...for surviving...and stepping up to the plate when she was needed, no matter how much she wanted to break down.

Sometimes it caught me off guard for the narration to switch over to Emily's Journal entries, but the viewpoint changes grew on me.  I also realized in the end that I might not have gotten to know Emily as well without a glimpse into her ideas about what was going on around her.

If you are a Dickens fan, a fan of the gothic novel, or simply interested in detective stories (a little on the gruesome side) set in London, you will love this book.
I did.


Tuesday, May 7
Review at So Many Books, So Little Time


Friday, May 10
Review at The Lit Bitch


Wednesday, May 15
Review at Confessions of an Avid Reader


Thursday, May 16
Review at Impressions in Ink
Guest Post at Confessions of an Avid Reader


Friday, May 17
Review at Flashlight Commentary


Monday, May 20
Review at Unabridged Chick


Wednesday, May 22
Review at Peeking Between the Pages
Interview at A Bookish Libraria


Friday, May 24
Review at JulzReads


Monday, May 27
Review at From the TBR Pile


Tuesday, May 28
Review at My Reader’s Block
Feature & Giveaway at My Reading Room


Monday, June 3
Review at As I Turn the Pages
Review & Giveaway at Broken Teepee


Thursday, June 6
Review at The Bookworm
Review at Bags, Books and Bon Jovi