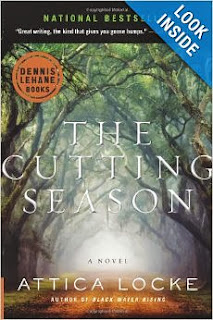 Source? the publisher via TLC Book Tours
**FTC Disclaimer - The publisher provided me a complimentary copy of The Cutting Season in exchange for an honest review.  The review below and the opinions therein are my own and offered without bias.

Title? Sugar cane and all that it implies...

I was reminded of? Murder at Monticello by Rita Mae Brown, John Grisham's A Time to Kill

Why? I'm a Southerner...through and through, warts and all.  I'm an easy target with a book like this one, but I also have high expectations..

What Now? Locke is an author to watch.  I've already added her debut novel Black Water Rising to my WishList and will snatch up anything else she writes.

It was during the Thompson-Delacroix wedding, Caren's first week on the job, that a cottonmouth, measuring the length of a Cadillac, fell some twenty feet from a live oak on the front lawn, landing like a coil of rope in the lap of the bride's future mother-in-law.  It only briefly stopped the ceremony, this being Louisana after all. (3)

"'Cakes," Caren said, swallowing hard, "I need you to tell me the truth."
"I am."
Caren could hardly look at her.  She lowered her eyes, her gaze falling on the stain, lying face up between them.  She saw its twin in her mind.  She saw the open grave and the dead woman and the shock of blood that soaked the front of her clothes. (78)

She could still smell him in the room, long after he was gone. (153)

The night silence between them was briefly filled with the soft rustling of cane leaves in the distance. (172)

There were no brides in here, no catered affairs, no twinkling lights on the north lawn.  There was no spectacle, no scenery sure to charm.  There was just history, naked and plain. (232)

Some place cheap and clean and close to work.
Ines had been looking for a place to stay. (254)

"There's a story about this place, about the history, that he wants told." (266)

Ken Wiggams, the black guy, was the only one who didn't venture into the slave village, never setting foot on the dirt path.  He stood apart from the others, his hands shoved in the pockets of his black slacks, his mouth pinched into a bitter, grudging expression, and it occurred to Caren that she should have found a way to bring this man out here alone, away from his white colleagues, that her last-ditch effort to save the plantation might have gone better if she hadn't put him in the difficult position of necessarily viewing himself as two men at once: a president and a descendant of slaves. (366)

Caren Gray and her daughter Morgan live at Belle Vie, a Southern sugar cane antebellum plantation in Louisiana.  Caren's mother was the cook at Belle Vie for many years while Caren grew up, and Caren returned in her own adulthood to the place she connected to the most as a home.  Caren runs the site for its owners, organizing field trips, cultural tours, and hosting events...until one day a body turns up and an antique cane knife goes missing out of the old slave quarters.  It becomes apparent very quickly that there is a part of Belle Vie's history that refuses to remain silent.

LOVE the pen and ink map of the estate Belle Vie.  I didn't need a lot of help visualizing the plantation, but the map helped me follow Caren along her early morning solitary rides through the property and her nighttime sprints from the front gate to the house.

Caren's personal connection to the past as well as the present and especially the careful dance in which she must participate for the well-being of her daughter and the others who work at Belle Vie.  Should the past stay in the past or should the real truth be told?  And, who gets to decide?

The connection between Eric and Caren - their past and their daughter ties them together forever...but not in the way that you think.  A very realistic portrayal of a complicated relationship in a complicated world.

The discussion of race - our students question history.  They wonder how history is relevant to their present day lives since "slavery is over" or racial issues are only discussed as a part of the Civil Rights Era.  I love the way Locke blends the past with the present and shows how history is always with us.  History will also lead us if we'll just follow it.

The "romance" - there's just enough that it doesn't even border on sappy...and it's very real, raw, emotional romance.

The Clancy's and the neverending reminders that their family "did so much for Karen and her mama."

This is a must read if you are the least bit interested in Southern Literature, plantation life, or just a dang good, chill bumps down your spine kind of mystery. 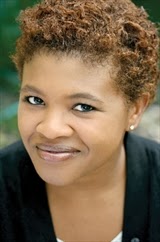