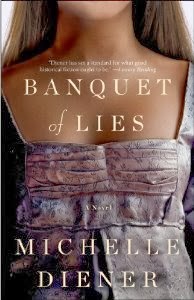 Banquet of Lies by Michelle Diener

Format? paperback
Source? the publisher via Historical Fiction Virtual Book Tours
**FTC Disclosure - I received a complimentary copy of Banquet of Lies from the publisher in exchange for an honest review.  The review below and the opinions therein are my own and offered without bias.

Why? Historical fiction, a strong female lead, lords and ladies, and a glimpse into the downstairs.

I was reminded of? "The Aristocats," "Downton Abbey," The Prince and the Pauper, the Maisie Dobbs series

What Now? I'd like to read In a Treacherous Court and The Emperor's Conspiracy by Diener.

"You make the dishes?"  The woman tapped Gigi on the arm with her fan.  "With the servants?" Her voice was a squeak. (2)

Just like she'd done to his butler, his cook had picked him up like a bottle of champagne and shaken him vigorously, and now, at last back down on his feet, he could only stumble about, ready to explode.
It was a sensation he suddenly craved again. (45)

"I will get the coffee now when I'm at the market, Mr. Edgars, as part of the household shopping.  And you are welcome to tell his lordship all about it.  If Lord Aldridge cannot afford to let his cook drink coffee if she wants to, or if he is so petty as to not allow anyone in this house to drink something he doesn't wish to drink, even though it will not affect him the slightest, then he has hired the wrong cook and I will give him my notice immediately.  (81)

She knew she was being followed.  She'd seen a movement, furtive and quick, out of the corner of her eye, and she didn't try to pretend to herself that it meant nothing.  (121)

She wanted to trust Lord Aldridge, wanted to go to him and confess everything. (181).

A smile and a bit of humor would have undone the damage, but Edgars seemed to have a knack for making things hard on himself. (200).

Giselle Barrington's father is murdered, and she must find a way to deliver a politically sensitive message to the right person.  Her father lost his life for the message; the least Giselle can do is complete his mission.  Unfortunately, her father's killer knows of her involvement in her father's affairs and is looking for her.  He wants the message and he wants her dead.  Giselle must hide in the home of Lord Aldridge, pretending to be his French cook while figuring out her next move.

His Edginess - I didn't so much like this character as I liked his presence in the book.  Plus, every time Diener used his name, Edgar, I couldn't help but think of the butler in The Aristocts :P The French phrases as well, reminded me happily of the little kittens singing and talking.  I couldn't help but wonder if Diener had been a Disney fan at some point?

Gigi/Giselle Barrington - I see a series in the making, and I'm sold if that's so.

The budding romance - I'm a snooty reader.  Yes, I admit it.  I'll pass up a book in a hurry if there's bodice ripping on the cover or too much of a hint of passionate swooning in the book summary.  When I first started reading Banquet of Lies, I actually became a little nervous..."Oh, great.  I've unintentionally accepted a romance."  A few pages later, however, the great romance snoot was hooked.  Oy.  Banquet of Lies has just enough believable swooning to make you think back to the early days of romance...when two people feel an attraction, realize there's something there, and fight against it for a bunch of silly reasons.  The romance was deeply embedded within the main plot of the story as well and not rushed at all.  I give in.  I want to read more about Mademoiselle Giselle Barringtong and Lord Jonathan Aldridge.

Status - interesting to note the status among the servants and particularly that of the cook since that position is the one Giselle fills at Aldridge House.  I wonder if all cooks could get away with such "cheekiness" and demands as Gigi and her "foster" father, Georges do.  It makes sense to me...the cook's ability to make or break each day with the quality of sustinance served in the household.  I've just never really thought of it before.

Giselle's boldness and her mistakes - she's a noble born woman...with inherent freedoms not afforded to true servants, so she messes up sometimes.  She slips with her gestures, forgotten titles, demeanor, and her role (place) in the household.  Her mistakes only further reinforce to her the plight of the common born woman, something which she has had no reason to consider before.

Some of the minor characters - Dervish, the men Giselle's father worked with, and even Frobisher got a little confusing at times.  I don't think I really got to know them well enough.  It didn't get in my way of the plot, however, and I don't feel like I missed anything.

If you like a solid, enjoyable piece of historical fiction melded with spying and murder mysteries, pick up Banquet of Lies. 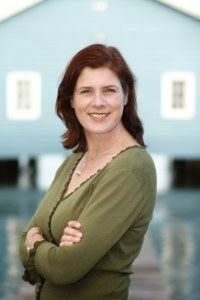 
Tuesday, October 22
Review at Historical Tapestry and The Adventures of an Intrepid Reader
Interview & Giveaway at Unabridged Chick


Monday, October 28
Review at Griperang’s Bookmarks
Review & Giveaway at Peeking Between the Pages


Tuesday, October 29
Review at Oh, for the Hook of a Book!


Wednesday, October 30
Review at A Bookish Affair
Interview & Giveaway at Oh, for the Hook of a Book!


Thursday, October 31
Review & Giveaway at Confessions of an Avid Reader