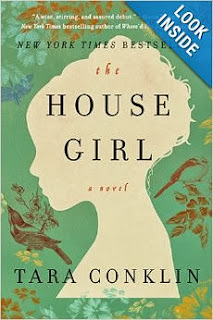 The House Girl by Tara Conklin

Source? the publisher via TLC Book Tours
**FTC Disclaimer - The publisher provided me a complimentary copy of House Girl in exchange for an honest review.  The review below and the opinions therein are my own and offered without bias.

Why? My lit emphasis area in college was American Lit.  I was fortunate enough at one point in graduate school to study slave narratives and was blown away by the talent that had been smothered, much of it forever since there are few records to trace the family histories and lives of slaves.
Reminds me of the Holocaust.
Wiping people off the face of the earth.

I was reminded of? The Color Purple, The Awakening

What Now?
The House Girl is Conklin's first novel, but I'm sold on anything else she writes. She's already on my auto ship list at Amazon.

During the course of the meeting with Dresser, Lina's desk had been cleared of all the papers relating to her old cases and a pile of books and binders  had replaced them: information on class action lawsuits, histories of U.S. slavery, economic treatises, financial models of farm worker wages and earned income, and case precedent - reparations of Holocaust survivors, for Japanese Americans, for East Germans post-reunification; decisions from the International Court of Justice, the Nuremberg Tribunals, the British Foreign Compensation Act. (72)

"Law is the bastion of reason," Lina's criminal law professor had always liked to say.  "There is no place for feeling.  As lawyers, we reason, we observe, we analyze." (75)

The harm was everyone and everywhere. (77)

As Jospehine passed the watercolor, she too paused to look upon it.  At Missus Lu's acceptance of Melly's praise, a familiar bitter emptiness sounded within Josephine.  An awareness came to her, as it had countless times before, that she possessed nothing, that she moved through the world empty-handed with nothing properly to give, nothing she might lay claim to. (104)

To be identified as white or black was quite literally a question of life or death. (127)

She marveled at Dan's poise, the unapologetic exercise of his presumed right to be an ass. (135)

The drawers she had kept so carefully shut all these years were now flying open as though in deciding to run again she had let loose something rough and dangerous within herself as well. (154)

"Long have I known Father's views on the instituion, but I had not heard him speak so openly before.  Slavery breeds nothing but sloth & degredation among the landowners, he told me, & it's the greatest hypocrisy that extends it still within our national borders." (212)

Lina Sparrow is an ambitious young lawyer working on a historic class-action suit seeking reparations for the descendants of American slaves. Josephine is a seventeen-year-old house slave who tends to the mistress of a Virginia tobacco farm—an aspiring artist named Lu Anne Bell. Alternating between antebellum Virginia and modern-day New York, The House Girl is a searing tale of art, history, love, and secrets that intertwines the stories of two remarkable women.

Josephine - While Josephine and Lina are the main characters of Conklin's novel, Josephine is the one who stood out to me.  She was the woman stuck in the room with the yellow wallpaper, she was Emily Dickinson, and all the other women who came before her who were forgotten.

Alternating Narrative - seems a lot of novels are using this strategy lately.  Sometimes it works, and sometimes it doesn't.  Conklin allows the reader to discover Josephine right along with Lina this way...and boy, does it ever work.

The letters, historical documents...we discover the truth as Lina discovers it...through the words of those who lived it.

The Undertaker - Mr. Rounds - The Underground Railroad comes alive in The House Girl.  My gut was in knots when he prepared the next shipment, and when Dorothea became involved...and especially when Dorothea tells Samuel.  I just knew.

The Ending.  We either choose humanity or we don't.
It's that simple.

Mister - every scene with Mister was like reading The Color Purple all over again.

Missus Lu - Conklin created Missus Lu as the character from a novel about slavery that some readers might say, "See, look, not all slave owners were bad people."  In between the lines, however, I think Conklin shows us just how faulty that excuse is.  Even though Missus Lu was "nice" to Josephine, she keeps her like a doll.  Josephine's life was important only as she served to keep Missus Lu's life pleasant.  Josephine couldn't have or be anything that didn't positively affect Missus Lu's life.  Even a child.
I honestly never felt sorry for this woman.  Never.

Slave hunters - not sure what you want me to say here...hunting human beings.

The House Girl is one of those few books that comes around that everybody should read. 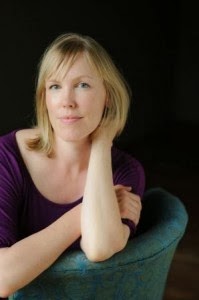 Tara Conklin has worked as a litigator in the New York and London offices of a corporate law firm but now devotes her time to writing fiction. She received a BA in history from Yale University, a JD from New York University School of Law, and a Master of Arts in Law and Diplomacy from the Fletcher School at Tufts University. Born in St. Croix, she grew up in Massachusetts and now lives with her family in Seattle, Washington. The House Girl is her first novel. - TLC Book Tours

Other Stops on the TLC Tour